I was born in Oklahoma and grew up in the Desert Southwest. A “cactus jumper,” for sure.

When I met Hubby who was from Texas and we moved to the Big D, I automatically became an instant Texan. That’s how it works in Texas. All former allegiance to other states… gone! If you live in Texas you’re a Texan and you better be loyal, gosh darn it!

So I’m a Texan and on New Years Day I eat Black-eyed Peas and Cornbread like every other Texan. 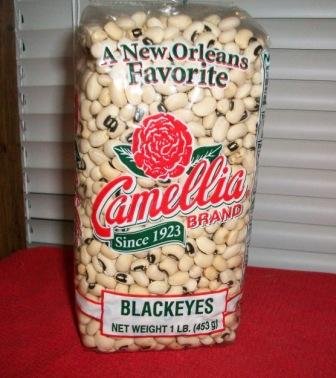 Don’t tell anyone, but If it’s only me and hubby for dinner, I sneak a handful of green chilis diced small and cream corn into that cornbread. Hubby can keep a secret occasionally.

Real Texans eat Black eyed peas and Cornbread with nothing more than a big hunk of onion. That’s it! None of that sissy stuff like comes from Taco Bell. (My brother-in-law would say.)

So I have to put the pot on the Stove and get my Black-eyed Peas cooking for tomorrow.

What are you having for dinner tomorrow?